Someone says that Tanzanite is how sapphire would like to be It is definitely a rival of the Sapphire for its intense blue colour. Many became aware of its unique beauty so that mines are being depleted. This gemstone is mined only in Tanzania and is becoming increasingly rare.

"Colour is fundamental, the most vivid blue and violet blue are the most valued."

Tanzanite with a good color and a square-shaped cushion cut. The gem has a clean crystal, free of inclusions and an excellent brilliance. The symmetrical

Tanzanite with excellent color, saturated and deep as in the best specimens of this gem. This specimen with a brilliant oval cut lends itself well

An extraordinary brilliance and a very charming cut, combined with a respectable carat weight, make this magnificent cushion Tanzanite a valuable choice, destined to give

Beautiful example of Tanzanite with a refined and very particular round cut, which makes the gem suitable for multiple creations. Good color point, intense and 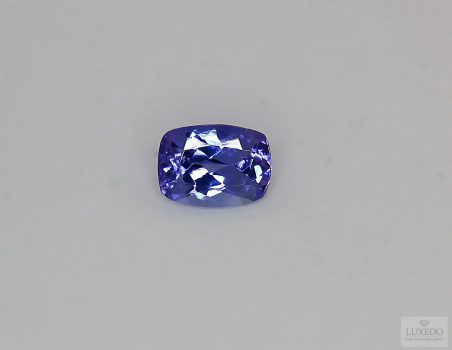 An Eye Clean crystal, a good color point and a refined cushion cut are the hallmarks of this beautiful Tanzanite of over one and a

Tanzanite such oval cut of excellent workmanship and brilliance. The crystal is transparent, free of inclusions and the color is very good due to the

Exceptional color for this magnificent Tanzanite with a romantic heart cut. The important carat weight and the particularity of the cut make this gem a

A cut with a strong personality, the beautiful trillion of this Tanzanite, is combined with a respectable color point, enhanced by the purity of the

Add to cart In CartDetails
Sale!

Birthstone of those born in the month of December, the Tanzanite captivate at first glance others also, thanks to the brilliance and richness of its

Exceptional carat weight for this beautiful tanzanite with excellent gemological characteristics. This rare crystal has a beautiful oval cut which gives fabulous sparkles to the

Tanzanite with excellent color and an important carat. The color is intense and saturated and the crystal is free of inclusions. The classic very brilliant

Sacred gem for Masai warriors since ancient times, Tanzanite is a recent discovery in the world of high jewelry, today highly appreciated and sought after

Cushion-cut tanzanite of exquisite workmanship and brilliance. The color and purity of the crystal is also good, free of inclusions. The carat weight and size

Tanzanite with wonderful color and saturated and intense color. The gem is also very bright thanks to a well-faceted oval cut and a crystal free

Tanzanite with a fascinating cushion cut that enhances its brilliance and excellent color. The crystal is transparent and free of inclusions. The gemstone is well

Generous-sized tear drop Tanzanite. The gem has a very clear and transparent crystal and an excellent color saturation. The shape and size of the cut

Tanzanite of excellent quality, hue and color saturation are the gemological characteristics that distinguish it. The well-proportioned and brilliant square cushion cut completes the curriculum

The most romantic among cuts, a heart richly faceted, gives this unique tanzanite of over four carats a unique personality. Increasingly appreciated in the world

Magnificent richly faceted heart cut, beautiful clear and luminous crystal, a vivid and brilliant blue make this Tanzanite a brilliant choice, for those who want

Add to cart In CartDetails
Go to the catalogue

Tanzanite is an unusual variety of the zoiste mineral that was very recently discovered, in 1967, near Arusha, Tanzania.

This gemstone is characterized by a blue colour, often with a purplish hue. Its value depends on the shade and saturation; blue is highly valued whereas the paler colours like pale lavender are less valued.

Its value also depends on its rarity as it is found in very limited quantities and almost exclusively in Tanzania where it seems that the main mine is being depleted.
Tanzanite value is slightly lower than that of some sapphires, and in fact its colour resembles that of a fine quality sapphire. Tanzanite loses its comparison with the sapphire for its hardness, seventh and ninth place on the Mohs scale. Despite that, its beauty and deep colour of the finest specimens made a gemstone expert say: “tanzanite looks like a sapphire would like to be” despite

Just before its official discovery, a Masai warrior showed up at the office of a renowned gem cutter in Nairobi with a piece of blue-violet raw material of over 10,000 carats .
The gem cutter dismissed him thinking it was glass.

Subsequent events proved that he had refused a huge fortune as in fact the material was later called Tanzanite by Henry Platt, the vice president of Tiffany in honour of the country in which it was discovered.

Some blue-violet gemstones are found on the surface but their colour is due to the warming of the equatorial sun. Tanzanite which is extracted from the ground on the other hand, presents brownish grey tinges which are then removed by heating the raw material.

To buy a gemstone is making an investment, if don't want to make a mistake you need to know: What to buy The purchase price Who can give you guaratees You can find all the answers in our free guide

The engagement ring – first episodeAn engagement ring tells the world that the person wearing it is committed for life and is going to be married. The use of sealing ...

September, blue gemstones month!September marks the end of summer; it’s time to go back to work, to think about life and of new beginnings. To celebrate this month ...

“Gem hunting” tourists. Good deals are rare.Many tourists decide to buy gems in foreign countres believing to do great deals, but they are often cheated and buy synthetic or treated gemstones. ...

Queens’ jewels: the treasures of the crownPresent and past queens have always owned precious jewels and gems. The queen’s jewels, from crowns to engagement rings, seduce and fascinate for their beauty ...

History and characteristics of cocktail ringThe cocktail ring originated in the Twenties, in relation to Prohibition, ad it became famous in the Fifties. Presently, it is a fashionable jewel, loved ...

Tanzanite, the queen among the blue gemstonesThe tanzanite was discovered in 1967 by a Maasai. The name of the gem was invented by Tiffany’s vice-president who organized an exceptional campaign to ...

The gems to donate for ceremonies and celebrationsA precious gem, mainly set in a custom-made jewel, is surely an appreciated gift. There are some occasions in which some gems are ideal choices ...

Kinds of cuts for diamonds and gemsThe cut process of precious gems is very relevant as each cut is able to enhance the hue and brightness of gemstones and diamonds. There ...

Origin and tradition of earringsEarrings were used by ancient populations as symbol of richness, but they also spread among nomad tribes of several origins. In the past, earrings were ...

This website and third-party tools used by this make use of cookies necessary to provide its services and analyze traffic. By continuing to browse, you consent to the use of cookies. For more information or to deny / revoke consent and delete all or some cookies, consult the Privacy Policy.I agree to use of cookies